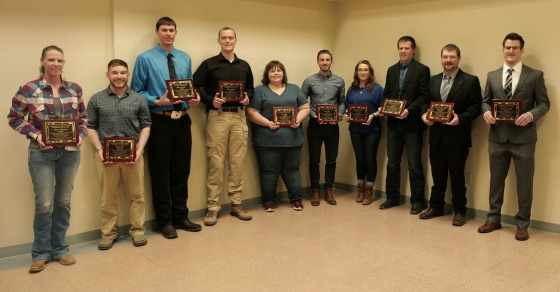 Devin Bray. Devin Bray is a senior majoring in business administration with plans to attend law school after graduating from Northern. While maintaining a 3.91 g.p.a., Devin is the Lights starting point guard and a member of the golf team. He is the recipient of many scholarships including the Michael P. Callahan Scholarship, the Mia Pease Scholarship and the Legends for Lights Scholarship. He earned Academic All American honors in basketball for the 2018-19 season and was named Academic All-Conference in both 2017-18 and 2018-19. He earned Academic All-Conference Awards for each of his three seasons as a Northern golfer. He earned the NAIA Champion of Character award for both basketball and golf.

Devin has done many hours of service for Northern and the Havre community including the NLASF Trap Shoot, the HIT Basketball Tournament, city clean-up, serving senior citizens and loading and delivering meals for families in need at Thanksgiving. Among the many hours of service to our community, of particular note, Devin helped with set up and take down of the Havre Art Show, read books to grade school kids for Martin Luther King Day, made ginger bread houses with grade school kids, and carved pumpkins with senior citizens.

Cacie E. Cain. Multiple nominations brought Cacie E. Cain to the attention of the selection committee. She is a junior majoring in criminal justice. She has maintained a 3.65 g.p.a., while working full-time for the Montana Public Employee Retirement Administration and pursuing her degree as a full-time on-line student. One of her nominators wrote, "Throughout the five courses I have had the pleasure of teaching Ms. Cain, she has impressed me with her focus and commitment not just to passing the classes, but to actually learning the material and applying it to her life."

In addition to her exemplary service through her work with the Montana Public Employee Retirement Administration Cacie was selected by the Lewis and Clark County Sheriff's Office to participate in their two-year Reserve Deputy program. This program requires Probationary Deputies to engage in several hundred hours of classroom learning, practical exercises, and field training with mentor Deputies.

Barry has been an active member of the Northern community through a number of campus organizations, including SkillsUSA, where he served as Chapter President and Post-secondary State President for MSU-Northern SkillsUSA. Barry was a part of ASMSUN, where he served as senator; Northern PAS (Post-secondary Ag Students), where he served as IOC Representative, as a member and later chair of the Public Relations Committee, the Meet and Greet Committee and Emcee. He was a member of Chi Alpha; a Northern Student Ambassador; Young Ag Leadership Conference attendee. Barry also served on the Vice Chancellor and Provost Selection Committee and was a Manhattan volunteer fire-fighter.

Barry was one of many students who earned the Volunteer of the Game in 2017 for their efforts during the Eastfork Fire in 2017 and for building fences on two occasions in Eastern Montana after fires devastated that area.

After graduation, he plans to follow a career in the agricultural industry. He hopes to own his own farm and ranch.

Lona Gibbs. Lona Gibbs is a senior majoring in elementary education who carries a 3.9 g.p.a., while participating in a variety of campus and community activities. She has been a CAP Mentor, secretary and on the leadership team for Chi Alpha, and a Student Education Association (SEA) member. She is the recipient of the Gates Millennium Scholar award and the GEARUP Pathways Scholarship.

After graduation, Lona plans to fulfill her life-long dream of teaching and being a positive role model for her students. She hopes to find a position teaching either in Browning or on the Hi-Line.

Blaze Goldhahn. Blaze Goldhahn is a senior pursuing a baccalaureate degree in criminal justice and maintains a 4.0 g.p.a. Blaze was homeschooled until the spring of 2015 when he earned his high school equivalency diploma. He chose to work for a year before entering Northern in the fall of 2016. At that time, he received the MSU-N Gold Merit Waiver, which he has maintained throughout his career at Northern.

Desiring to immerse himself in the German language and culture, Blaze planned a trip to Germany for the summer before his senior year. His summer long visit to Germany was so rewarding that he came back to campus and signed up for Spanish courses. He is active in both German and Spanish conversation groups.

He served on the Residence Hall Association leadership team in 2017-18 and subsequently earned a resident assistant position this year. He will graduate in 2022.

After graduation, Blaze hopes to find employment as a Border Patrol Agent.

Robert Pair. Robert Pair is a senior pursuing the bachelor of applied science degree in civil engineering technology and a certificate of applied science degree in welding and has a 3.75 g.p.a. He has been working for Northern Food Service for the last four years working his way up to the position of Student Manager. He has been a dedicated employee in all aspects of food services from the Food Court to Catering. He has always been willing to help whenever needed—and his supervisor greatly appreciates that. Rob has become a great asset to the catering staff, has become the "go to" person, and often requested caterer for our special dinners at the Chancellor's House. He has gone above and beyond his duties as Student Manager to ensure that his co-workers and fellow students have the best help and service.

In addition to his work for Northern Food Services, Rob is a wrestler for the Northern Wrestling team, earning Academic All-American honors. He serves on the MSU-N Student Athletic Affairs Committee as president and is the Frontier Conference Representative to the Association of Student Athletes.

Robert expects to graduate in May 2020. Upon graduation he plans to find a job at an engineering firm either in Montana or Idaho.

Luke Rech. Luke Rech is a senior pursuing the Bachelor of Science degree in ag operations technology and business administration. He carries a 3.7 g.p.a.

Outside of the classroom, Luke has had a busy four years at Northern. He is a member of the Business Professionals of America, president of the Chi-Alpha Christian Club, and president of the MSU-N Collegiate Stockgrowers Association. He served as a resident assistant in Morgan Hall, and is a reliable volunteer for many campus events. He recently received the "Volunteer of the Game" award.

After graduation, Luke plans to continue his involvement in production agriculture with his parents and pursue an agri-business career such as banking.

Spencer Sartori. Spencer Sartori is a graduate student in our Master of Education Counselor Education program with a 3.8 g.p.a. Spencer responded to the needs of his high school alma mater for a school counseling program and agreed to relocate to support the school district's needs. He volunteers countless hours working with high school students and their families to assist them in supporting their dreams for higher education.

He came to Northern's counselor education program because he saw the tremendous need for mental health wellness in the small schools along the Hi-Line.

His school has benefited from his professional commitment to give back and support the community's students and families through providing opportunities for families to complete FAFSA applications and working with community resources to support at-risk students. According to his nominator, "Spencer is a role model in the community of a young professional man who is caring, compassionate, and demonstrates how to be strong, sincere, and live a life of integrity."

After graduation, Spencer plans to work as a high school counselor in the Lincoln County High School, and continue to work to establish a district-wide suicide prevention programs with school administration and other district counselors.

Wade has worked hard to be an active participant in the college experience at Northern—both in and out of the classroom. His commitment to the classroom has resulted in a 4.0 g.p.a. Outside the classroom, he has been a member of Collegiate Stockgrowers Association (serving as secretary), and helped to rebuild fence that was burned in an area affected by the Lodgepole Complex fire. For their efforts, the club received recognition as "Volunteers of the Game."

He is currently serving as a resident assistant in Morgan Hall where he has performed exemplary work with the men of Morgan 700. A sports enthusiast, Wade volunteered many hours to Northern's intramural program running volleyball, dodgeball, and basketball. He has also volunteered to help with events like the MSU-Northern Alumni Auction, Cowboy Christmas, Teknoxpo, SkillsUSA and Campus Cleanup.

Most recently, he was awarded the Mike Rowe Work Ethic Scholarship.

After graduation, Wade plans to get a job with a plumbing company in Montana who actively supports the program here at Northern.

Samuel Smith. Samuel Smith is a senior pursuing a Bachelor of Science degree in biology. Samuel is highly focused on his academic pursuits at Northern and carries a 3.85 g.p.a. Because of his strong academic performance, he was asked to be a teaching assistant by his anatomy and physiology professor—she reported, "My students respect him and they eagerly learn from him."

Samuel has participated in two undergraduate research projects, personally researching health issues in college age individuals at MSUN and assisting another student by collecting data at one of the Healthy Lifestyle Advocates (HLA) health fairs. He has been working with the HLA club for the past two years conducting surveys on campus and advocating for healthy dieting, exercise, and drug prevention. As an active participant in the HLA club, Samuel has earned the title of Certified Peer Health Educator.

He was selected by Healthy Colleges Montana (HCA) as one of two students sponsored to attend the National Association of Student Personnel Administrators (NASPA) national conference. He also attended the HCM conference held at Carroll College on the topic of peer education and involvement.

In addition to these volunteer activities, Samuel is a Certified Nursing Assistant and currently works as a phlebotomist, assisting medical technologists in the Northern Montana Hospital lab. After graduation, Samuel plans to attend medical school.

Teresa Stevenson. Teresa Stevenson is a senior pursuing a Bachelor of Science degree in agricultural operations technology and a minor in small business. She maintains a 3.47 g.p.a.

A long-time Northern faculty member, Teresa's nominator, wrote, "Rarely have I had the opportunity to nominate a more deserving candidate than Teresa L. Stevenson for Montana State University-Northern's Student Excellence Award. Teresa has been a tireless worker, a leader, a good student, a part-time employee, and a superb volunteer for many activities in and out of the classroom. She is well liked by other students and has been a superb role model for Northern students and Post-secondary Ag Students (PAS) Club members for several years."

She earned 2nd place in the leadership competition at PAS Nationals in 2018, served as secretary/treasurer for PAS, and led five committees for that organization. Teresa also serves as assistant leader for the Kremlin Hawks 4-H club.

After graduation, Tessa plans to start a farrow to finish swine operation.