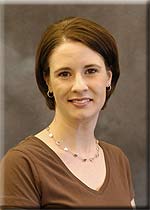 Jamie Bawden, of Choteau, plans to graduate in May of 2006 with a Secondary Education degree in English and a minor in Art Education. She is the daughter of Jane McFarlane and has one daughter of her own. Upon graduation, Bawden plans to earn a Master's Degree in Educational/School Psychology. Prior to moving to Havre, she worked as a legal secretary in Lewistown. While at Northern, she has been very active as a volunteer for various groups, such as Hill County Boys and Girls Club, Campus Clean-up, and Americorps/America Reads. 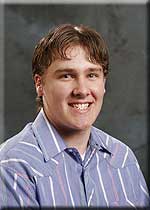 Cody Blanchard, of Great Falls, will graduate from Northern in May of 2006 with a Bachelor's degree in Automotive Technology, an Associate's degree in Diesel Technology, and a minor in Business Technology. He is the son of Larry and Carla Blanchard. When he graduates, Blanchard plans to works as a technician with a company in the Northwest and work his way up to a management position. For two years Blanchard has been a night lab monitor where he manages a lab and tool room and helps other students with their vehicles. 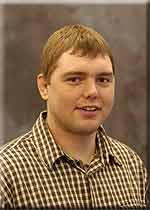 Kyle Fisher, of Havre, graduated in December of 2004 with a Health and Physical Education degree with a Secondary Education minor in History. Fisher is engaged to Lexy Ranes. After graduation, Fisher plans to become a teacher and wrestling coach. Along with excelling in academics, Fisher is a four-time wrestling All-American and a 2004 NAIA National Wresting Champion. He served as co-captain of the team his senior year and was an assistant coach for the MSUN wrestling team for the 2004-2005 school year. Fisher also worked as an aid at Havre Middle School and as a tutor for student support services.

Brian Frey, a graduate of Cascade High School, will graduate in May 2005 with a Diesel Technology degree and a minor in Business Technology. He is the son of Bob and Sharon Frey of Turner, Oregon. In June of 2005 Frey will begin a Trainee Technician position at Peterson Machinery Company in Albany, Oregon, and hopes to move into a managerial role. Frey is a second-year resident advisor on campus and has excelled in that role. He has also been active in intramural sports and is the president of Campus Crusade for Christ. He also earned a Future Farmers of America American Farmer Award.

BreAnna Garner, of Harlowton, will graduate in May 2005 with a Bachelor's degree in Health Promotion. She is the daughter of Gwen Ward of Deer Lodge. At this time Garner is unsure of what she will do after graduation. Garner was a Skylights volleyball player her sophomore year until an injury ended her volleyball career. She has worked in the registrar's office for four years and was very instrumental in planning and coordinating the first-ever "Wellcheck" for the Employee Wellness Program on campus. Garner completed her cooperative education working for Dr. Janet Trethewey in the MSUN Wellness Program. 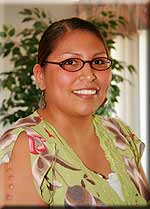 Ramey Growing Thunder, of Poplar, will graduate in May of 2006 with an Elementary Education degree with a concentration in Native American Studies and a minor as a Reading Specialist grades K-12. After graduation, she hopes to teach Dakota-Sioux Language and Culture in the Poplar Public School system. She plans to continue her education and earn a PhD in Native American Studies. She is married to Darryl Growing Thunder and has two sons. Growing Thunder has also attended Fort Peck Community College and Dawson Community College, where she played fast-pitch softball. 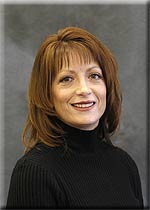 Julie Monson, of Havre, will graduate in December 2006 with a Bachelor's degree in Secondary Education: Social Science. Monson hopes to find a teaching job in Montana after graduation. She then hopes to continue on to earn a Master's degree. She is the daughter of Margaret Monson of Havre. Monson works at student support services, where she works with students on a one-on-one basis. She has volunteered for various activities, including the Red Cross blood drive and the Soroptomist booth at the Hill County Fair. One of her hobbies is sewing, and she has donated many crafts, especially quilts, to different organizations to be used as raffle items. 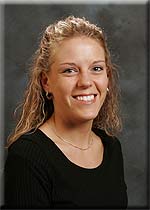 Mishel Stovall, of Bozeman, plans to graduate in December 2005 with a Business Technology degree and a minor in Small Business Management. She is the daughter of Mike and Aleta Madsen of Bozeman and is married to Reid Stovall. After graduation, Stovall plans to start a Property Management business that she can manage from home while raising a family. She is a Northern cheerleader and for the past two years has led the team in the absence of an advisor. Stovall has also been a volunteer in the community, working with the Habitat for Humanity, Humanitarian Aid, and the Boys and Girls Club. She is also an active leader in her local church's primary program.

Reid Stovall, of Bozeman, will graduate in May 2006 with a Bachelor's degree in Civil Engineering Technology and a minor in Drafting. He is the son of Kirk and Diane Stovall of Bozeman and is married to Mishel Stovall. Stovall plans after graduation to secure a job with the Montana Department of Transportation or the Forest Service as a civil engineer. He is a member of the Northern Lights basketball team and was chosen by teammates as team captain. He is a Young Men's Leader for his local church group and is also an Assistant Scoutmaster for Boyscout Troop 434.

Peggy Unterseher, a graduate of Fromberg High School, will earn a Bachelor's degree in Graphic Design and Secondary Education English degree with a minor in Art Education in December 2005. She is the daughter of Mrs. Gerry Unterseher of Fort Benton. Upon graduation, Unterseher would like to teach English and/or art in a small Montana school district and freelance in graphic design. She is also considering earning a Library Science degree and a Master's degree in Fine Arts. She is currently working at the Vande Bogart Library on campus as Night Circulation Supervisor. She is a talented artist and has donated several designs to different organizations. 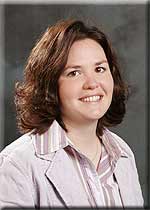 Amber VandenBos, of Valier, will graduate in May of 2005 with a Bachelor's degree in Agricultural Operations Technology with an emphasis in Business. She is the daughter of Tom and Laura VandenBos. After graduation, VandenBos will pursue a career in agribusiness, specifically agricultural lending or pharmaceutical sales for livestock. She plans to stay in Montana and serve agriculture producers across the state. She is currently employed at the MSUN Foundation Office and was recently hired by Northwest Farm Credit Services as a Cooperative Education student. She has also been a manager for the Northern Lights football team